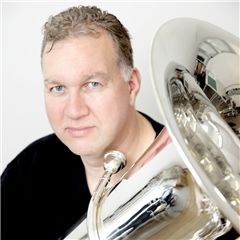 Eirik Gjerdevik (born 1968) is originally from Fusa, but now resides in Bergen. As musician, soloist, and conductor, he has become a familiar figure in the world of Norwegian band music. After deciding to concentrate on music, Eirik studied tuba at Bergen Music Conservatory with Nils Eivind Nikolaisen (Bergen Philharmonic Orchestra). He also took lessons from John Fletcher’s old tuba teacher, Stuart Roebuck (formerly tubaist in The Hallé Orchestra). He then travelled to Manchester to continue his studies at Royal Northern College of Music. Among the tuba players with whom Eirik studied while in England were Brian Kingsley (Opera North) and Andy Duncan (Hallé Orchestra). Since 1996 Eirik Gjerdevik has been a permanent member of The Armed Forces’ Band West (FMKV). He is Yamaha’s tuba soloist in Scandinavia and is invited to perform in this capacity in Norway and abroad. He has performed as soloist in Norway, Denmark (Faroe Islands), Romania, Switzerland, England, Bulgaria, and Australia, and he has commissioned and premiered a number of compositions for tuba. In 2005 Eirik recorded his first solo CD, Eirik the Viking. In 2010 he was soloist with the Pleven Philharmonic Orchestra in Bulgaria.